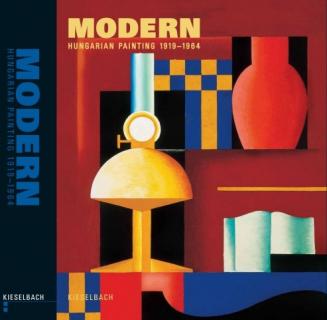 The present collection is the second volume of the comprehensive work, which is a presentation of a century of Hungarian painting. The first volume, Modern Hungarian Painting 1892-1919 - published last year - was awarded the 'Beautiful Hungarian Book of 2003' prize.

The second volume presents Hungarian painting from 1919 to 1964, a period characterized by an enormous richness, complexity and multiplicity. The works are arranged by an intentional, purposeful, systematic approach based on uncompromising principles.

More than 1500 paintings have been selected by Tamás Kieselbach - art historian, collector and dealer in art - from 70 museums in Hungary and abroad and some 180 private collections. The uniquely valuable reproductions are not mere illustrations. They take on the leading role in the book. The history of modern Hungarian painting speaks through the works themselves in a book that is primarily aimed at the eye. The history emerges from the choice of paintings, their positioning, sequencing and the visual experience they offer. Nothing is by chance or happenstance.

The essays, that have been especially written for this collection, are meant to add up to a history of modern Hungarian painting. The authors represent a sensitive, critical approach, a variety of individual viewpoints - leaving room for differences of opinion. Most paintings are reproduced here for the first time, as yet unknown concealed or hidden to the public eye. Their publication might prove to be a striking disclosure for the uninitiated and the expert alike. This work will establish itself as a uniquely valuable, informative account of modern Hungarian painting.

The simultaneous edition of the two volumes in English presents an opportunity to bring Hungarian painting to favourable international notice. The editor believes that that Hungarian painting deserves to be better known and to attain its befitting status similarly to other fields of Hungarian culture: film, music, photo and literature.

We are looking for high quality works of the selected artists for immediate purchase.

The site uses cookies to enhance user experience. Browsing this page, you agree to this. Details" Accept